Bike: The White Bike. It’s a fillet-brazed steel frame that I fabricated in 2011 when I took Paul Brodie’s frame building course at the Abbotsford Airport. I had such a great time over those two weeks. Paul is truly a hall-of-fame legend in the sport, a master craftsman, raconteur and all-around one of the nicest people you’d ever want to meet. Buy his book, it’s a great read.
My Story: I spent most of the summer of 1984 watching the LA Olympics on TV. I remember being transfixed by the track events, especially the Individual and Team Pursuit. I also distinctly remember watching the Olympic Road Race in my brother’s apartment. I couldn’t believe it when Canadian Steve Bauer sprinted to Silver. I had never heard of this guy! After that, I wanted to race in the Olympics but wasn’t dedicated enough to persevere through the junior ranks with little support or infrastructure. Like President Hans, I raced a bit with the Ottawa Bicycle Club, mostly doing the Thursday night TT series. My clearest memory of that experience was how this dude named Gord Fraser was absolutely smashing us all. Go figure.
When I was about 17 I had a chance encounter that made a big impression on me and my outlook on the sport. There was an influx of Latin American refugees in Ottawa at that time, fleeing the wars that the Americans were waging in the region. A few had dishwashing jobs in the restaurant where I was holding down a summer job, but being a relatively privileged white kid, they were largely invisible to me. Once, a guy stopped me in the kitchen when I walked by and said: “Hey, you race bikes?” Startled, I asked him how he knew and he pointed to the tan lines on my hands from my gloves. Then he started telling me about his racing career in Guatemala and regaled me with a blow by blow account of his crowning achievement – finishing 2nd in a National Championship. It was captivating and provided me with a life lesson on how sport can connect people and build bridges, but also how sport is a privilege that can be taken away by war, poverty, accident or illness, even by a virus!
Personally, I quit racing on my own accord and quit following racing for a couple of decades, using my bike just for casual transportation and commuting. Sometime around 2005, I was chatting on the phone with my brother -the one whom I watched the Olympics with and who now lives in Boston- and he asked if I knew about the Burnaby Velodrome. I didn’t. He had come across an article on the internet and was going on about how lucky I was to have that facility in my backyard and how I should try riding it. I guess that re-ignited a spark I had from back in ‘84 and I gave it a go. Those were the days of the Fast Twitch crew and there was a lot of yelling. Not super inviting but I dabbled for a bit – always frustrated with trying to get comfortable on a rental bike.
Eventually, I went hunting for a track bike and found a Chrome Bianchi Pista frameset on Craigslist. I remember heading over to some dude’s apartment on Broadway, with baby Sidney on my back in a carrier. I got that frame built up and that got me started proper.
But what really hooked me was learning about track from Jeremy Storie. I was fascinated by Jeremy because being a gym teacher as he was, he stoked my hatred for every obnoxious and abusive P.E. teacher/coach I had growing up. But at the same time, he was a P.E. teacher who taught bike racing – which of course was amazing. In the end, the love won out and bike racing re-entered my life. Thanks, Jeremy, I miss you and think about you a lot when I’m burying myself on a bike. R.I.P.
Goals: To keep improving, learning, and growing one way or another despite always getting older. I want to bring positive energy to the track every time I come. To be a role model. To perform at my very best to try to bring out the best performance in others. To use the performance of others to bring out the best in myself. 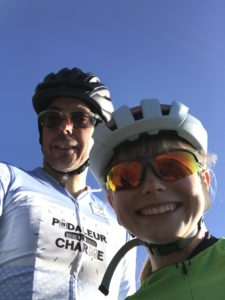 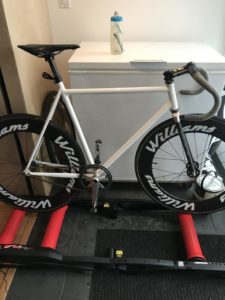 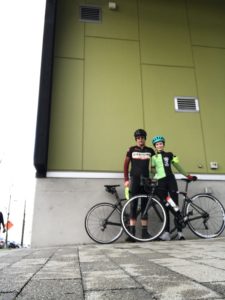