Name: Dave Huebert
Bike: I ride a custom made Cunningham that was designed by Randy Cunningham and built at Robert’s Composites.
Riding: I have been riding since I was seven when my dad bought me a red single-speed CCM bike. Promptly I overcooked a corner and slammed into a wall at full gas: I’ve been riding hard and occasionally crashing ever since. I started using a bike for fitness in August 1985, after four years of inactivity following an altercation with a car that doctors say I was lucky to survive. My first ride that August was one lap around Stanley Park, after which I collapsed at home and slept the rest of the day.
Goals: I plan on riding until no one else is left in my age category and then winning a bunch of world championship medals. Given my abilities, I figure that will happen somewhere around my 125th birthday.
Track; I became fascinated with track riding after watching the 2014 Burnaby 4-day and started riding shortly afterwards. 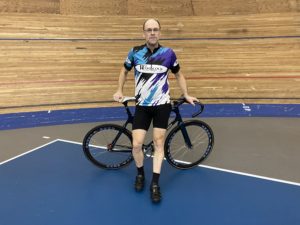 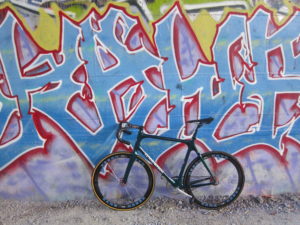