Spending the holidays with the family doesn’t always have to be about dodging your Mother-in-Law’s questionable cooking or entertaining the hoards. For those lucky enough to have come out to our 5th annual Burnaby 4 Day, the space between Boxing Day and New Year’s Eve was filled with high speed thrills, great food, and fun for the whole family. Over the course of the 4 days we had over 80 athletes, including four Olympians and ten national champions, competing for a chance to claim the Vie 13 champion’s jersey in their respective categories.

The event kicked off on Friday with our invitational sprint competition where Bernard Esterhuizen, former junior World Champion and 2012 Olympian, jumped into an early lead in the match sprints. We also saw an enthusiastic field of youth women take to the boards with Holly Simonson and Clara McKenzie jumping into an early lead over Quebec’s Veronique Parent. Meanwhile in the Pro-Elite competition, with $1500 on the line for 1st place, racing got off to a fast start. To finish the first day Team H&R Block’s Kyle Buckosky managed to edge out Sizzle Pie Cycling’s Zak Kovalcik, both on even points, leading in to the second day of competition. As an added treat Canadian National Team riders, and World Cup medalists, Laura Brown and Steph Roorda rolled up to the rail and off the front of the field in the Pro-Elite category. While they didn’t finish the night in the top three they certainly brought new meaning to the term, “you ride like a girl.” In the Madison Team BC’s Kyle Buckosky suffered a crash early on allowing Team USA’s Zak Kovalcik and Pat Jacks to slip into an early lead. While everyone finished on even laps, Jukeboxprint’s pair of Jacob Schwingboth and Adam Reddy were able to come in 4 points behind to claim 2nd ahead of Vie 13’s team of Aidan Caves and Mike Sidic going into the second day of competition. 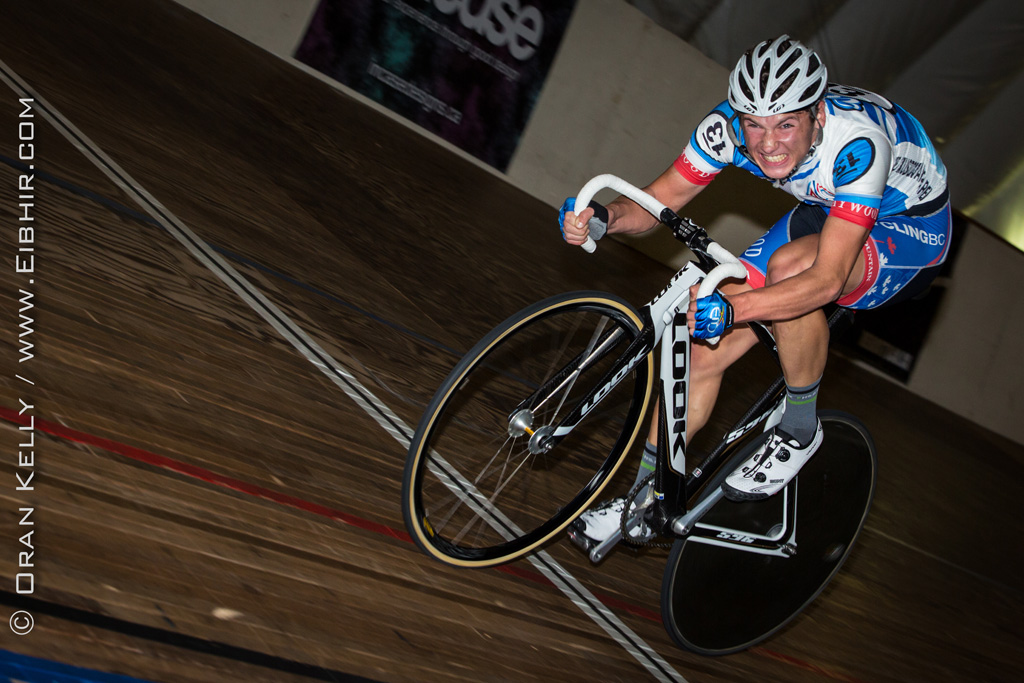 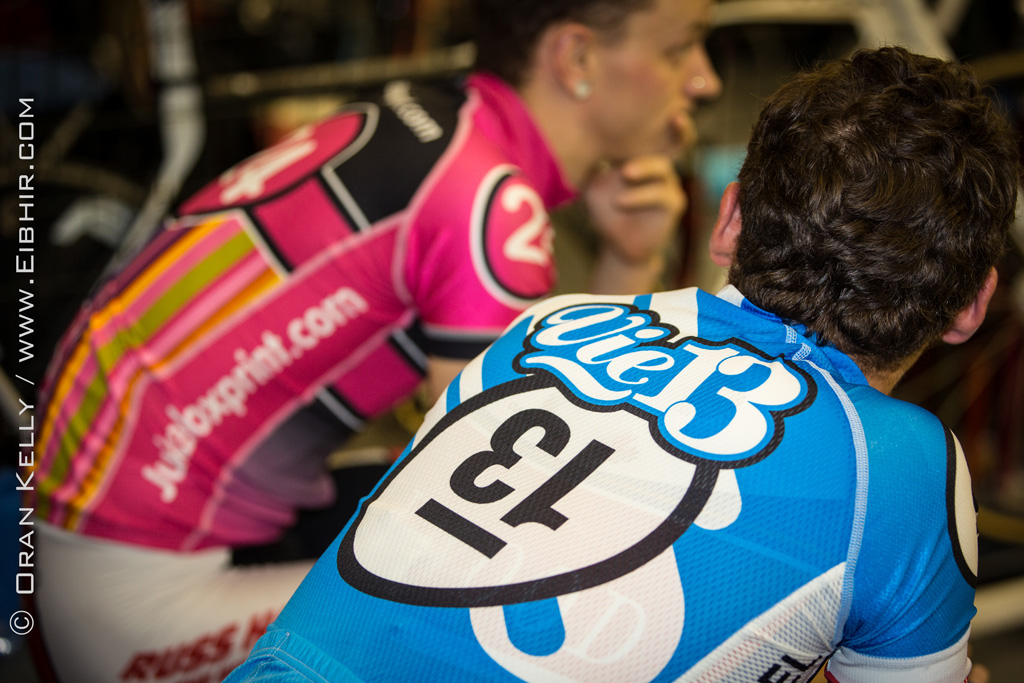 Saturday\s competition, although dotted with a few crashes, saw great performances by Alberta’s Evan Burtnik in the B’s as he took on the “Kaiser,” Michael Wegner. It also saw Zayne Heyes continue his reign of domination in the C competition and Stefan Ritter pull ahead in the youth men’s competition ahead of Brendan Armstrong and Rowan Morris. Meanwhile in the Pro-Elite category Jelly Belly’s Nic Hamilton decided to get in on the action as he claimed 2nd in the scratch race taking points away from Kyle Buckosky. By the end of the night Zak Kovalcik had managed to edge into the overall lead by a narrow margin. Victoria’s Evan Carey had a great performance in the invitational sprint competition as he claimed second in the keirin but no one was able to touch South Africa’s Esterhuizen as he cruised across the finish line with a commanding lead. In the Madison Team BC was able to turn the tide on their luck from the previous night and take a lap on the field. Kovalicik and Jacks of Team USA as well as Caves and Sidic of Vie 13 managed to stay on even laps while fatigue clearly got the better of Jukeboxprint’s Adam Reddy. 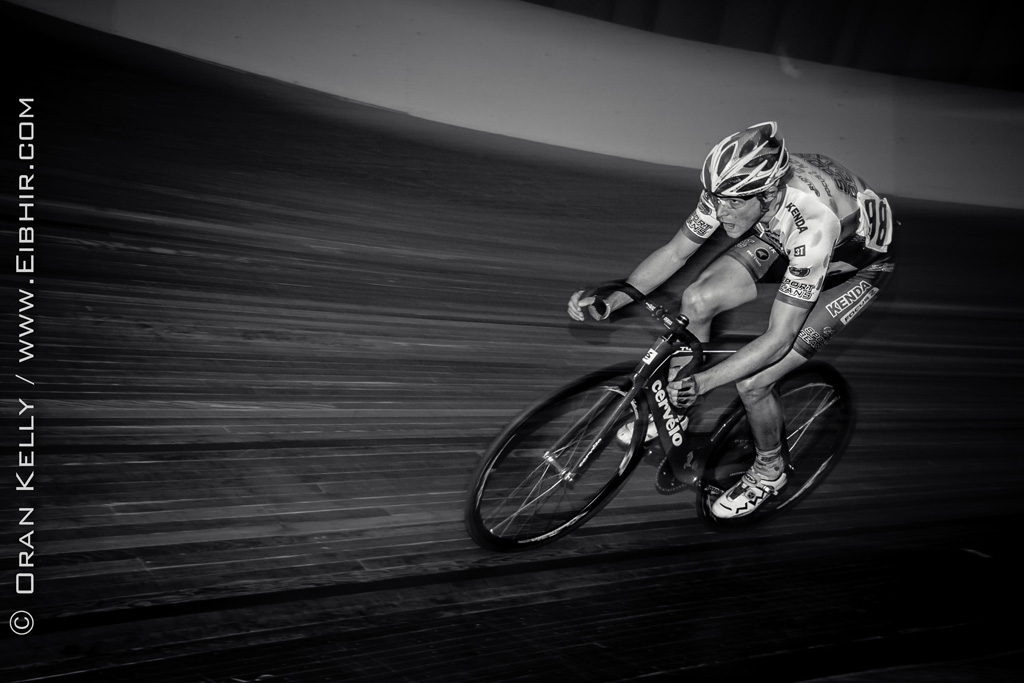 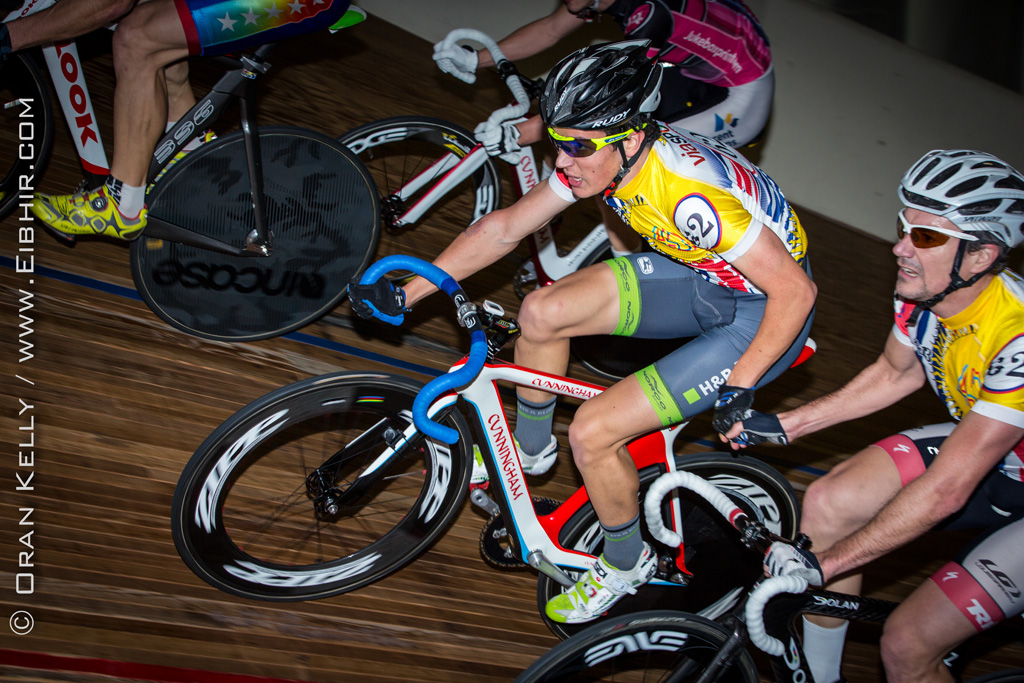 Day three of competition was the penultimate day for the youth women. Clara McKenzie stormed ahead winning both races and clinching the overall. Veronique Parent put in a great effort, claiming second in both of the night’s races, but wasn’t able to edge out Victoria’s Holly Simonson in the series. The B competition became a battle of the juniors with Michael Wegner and Devan McClelland being the only two riders over the age of 20 to get any points all night. That being said, there were no real changes in the overall standings in that series or the C’s.

Day three also signaled team events on the schedule and while the sprinters duked it out with team sprints, the women’s team pursuit squad of Laura Brown, Steph Roorda, Jasmin Glaesser, and Kinley Gibson took on a composite team of men including Zak Kovalcik, Jacob Schwingboth, Aidan Caves, and Nic Hamilton (all former or current national champions, national team members, or professional cyclists). On the sprint side of things the team of Evan Carey, Mark Milburn, and junior national sprint champion Andrew Grant managed to take second ahead of the US team of Jack Lindquist, Andrew Carlburg, and Cole Harding. However, with only one South African in attendance, Esterhuizen decided to take on both teams solo and after a blisteringly fast start he managed to stay ahead of both teams and clinch the overall competition lead. In the exhibition team pursuit the men’s team got off to an early lead. And, while the competition stayed relatively close throughout the 4,000 meters, the women’s precision showed and they were able to take the win by .05 seconds ahead of the men in front of an ecstatic crowd. 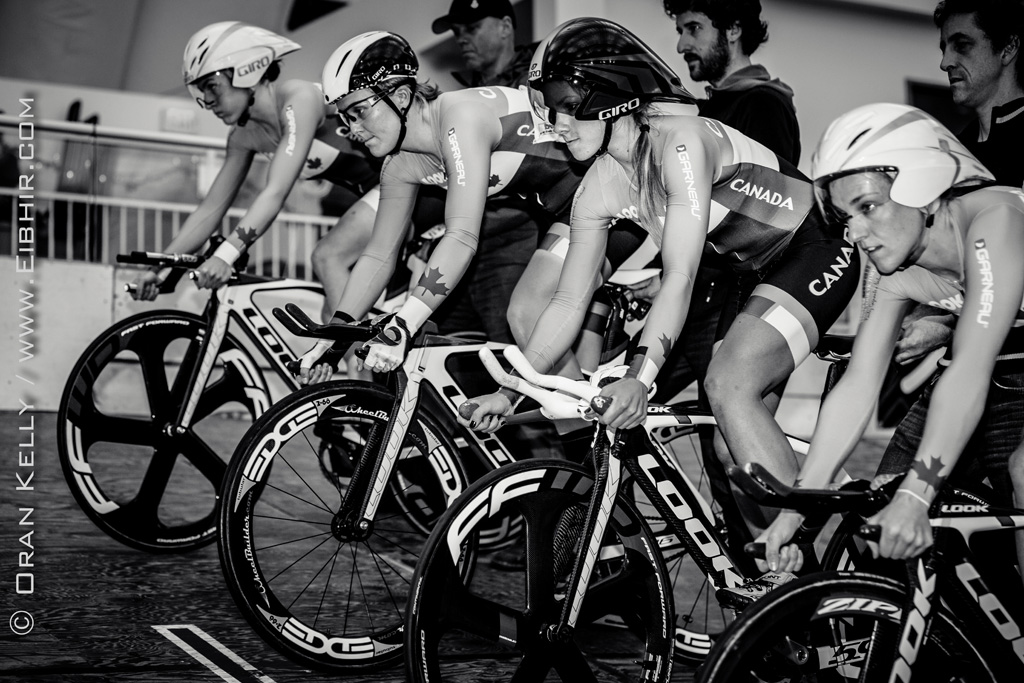 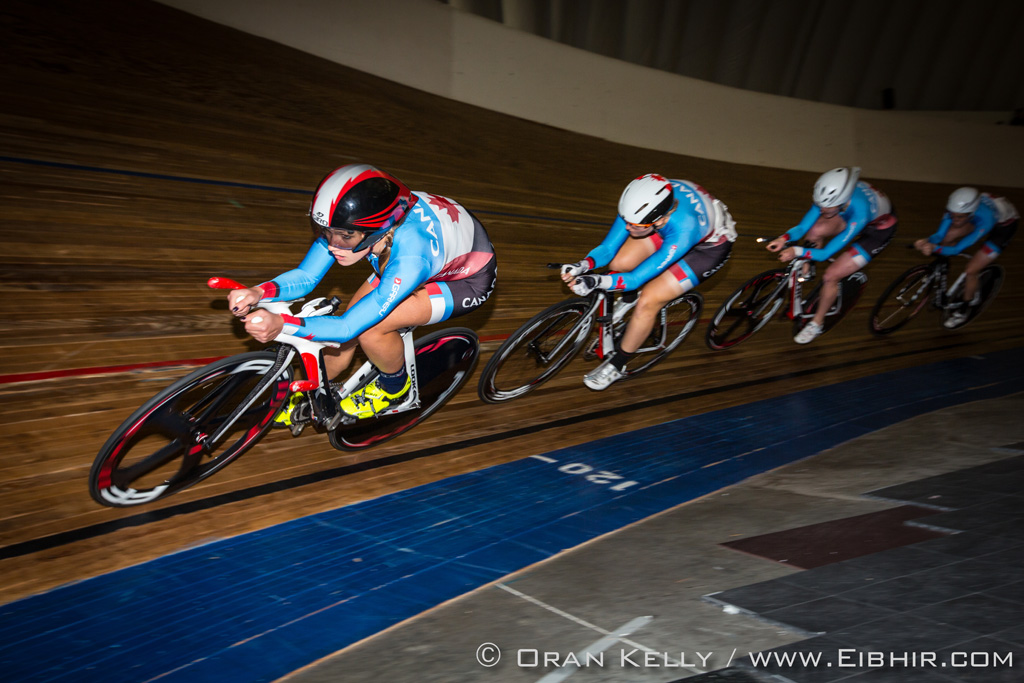 In the Pro-Elite competition Sizzle Pie’s Zak Kovalcik was able to maintain his lead over Kyle Buckosky by winning both of the night’s individually scored races. However, the night’s stand out performances came from Jacob Schwingboth who, after a couple of lack luster nights of racing, managed to slide into third in the overall by taking second in both the elimination and the win and out. In the Madison, Team BC maintained their one lap advantage on Team USA and Vie 13 leaving only one day for riders to take back a lap and get back into the competition.

With only one day left of competition any rider not happy with their standing was forced into action. In the C’s, the absence of Zayne Heyes did not go unnoticed as Cordell Dickie took wins in both of the night’s races. His wins, along with his performances in the previous nights, would move him into 1st in the overall ahead of Heyes. Chris MacLeod would also take advantage of the extra points to move into third. In the B’s, Evan Burtnik solidified his lead but Jackson Pickell, riding for Local Ride Racing, managed to edge out Michael Wegner to claim second in the overall. In youth men Stefan Ritter and Max Duso traded wins in the nights races but Ritter managed to maintain his lead in the overall just ahead of Duso and Brendan Armstrong.

In the sprint competition only the flying lap record attempt remained and the clear favorite was Esterhuizen. The only question was whether or not he could break the track record of 10.8 seconds set by Travis Smith in 2008. With $500 on the line the bait was set. As Esterhuizen roared across the line it was as if the crowd knew. While the officials checked the electronic timing the applause was deafening. 10.579, a new track record! 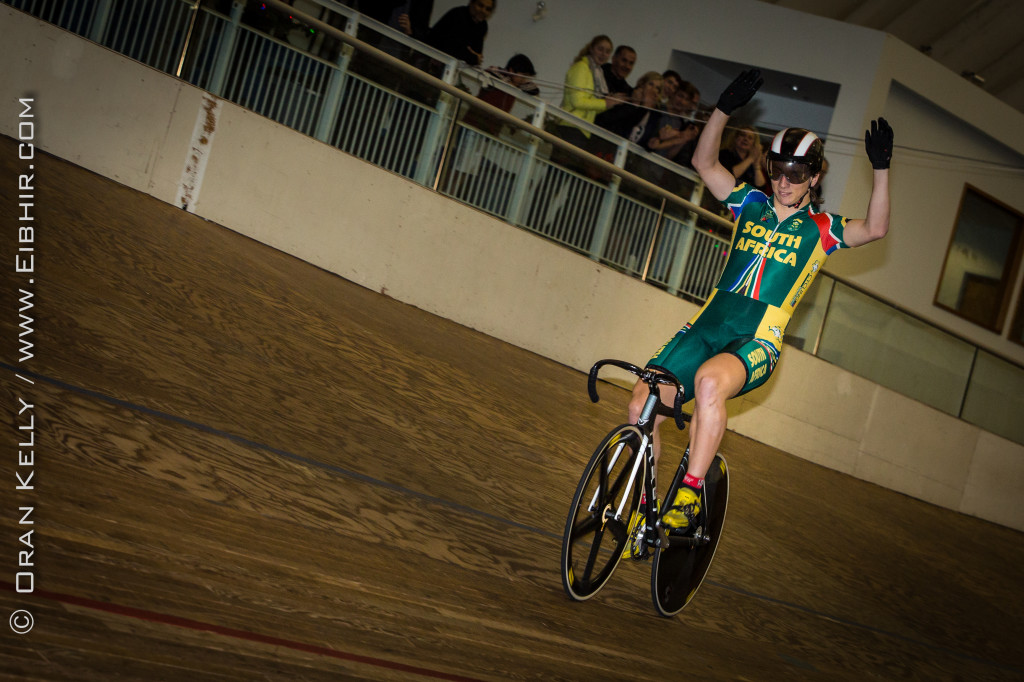 The Pro-Elite category saw an injection of new blood with Zach Bell, two time Olympian, returning to Vancouver just in time to get in on some of the action. Bell, the current National road race champion, turned on the heat just as the whistle blew to win the Antioquena ahead of Kovalicik. However, the roles were reversed in the scratch race with Kovalcik taking the win over Bell and Schwingboth respectively.

Going in to the Madison, Team BC was still up one lap on Team USA and Vie 13. Knowing that they only had one race to bring it all back together the pair of Kovalcik and Jacks blew the field apart taking back a lap to draw even with Team BC within the first half of the race. Vie 13 struggled with the pace and ended up going down two laps over the course of the race as did Team 88’s Julian Base and Robert Hargrove. Minutes before Team USA would get their lap back Jacob Schwingboth of Jukeboxprint.com shot out of the field. He and Adam Reddy, the “Aldergrove Assasin” put in a spectacular performance and were able to get back on even laps with the leaders. However, by the time they made contact there was nothing left to respond to another attack from Kovalcik, in what turned out to be the deciding move. In the end Team USA would lead the race with 2 laps ahead of Team BC’s Buckosky and De Rosnay and Jukeboxprint.com’s Schwingboth and Reddy. 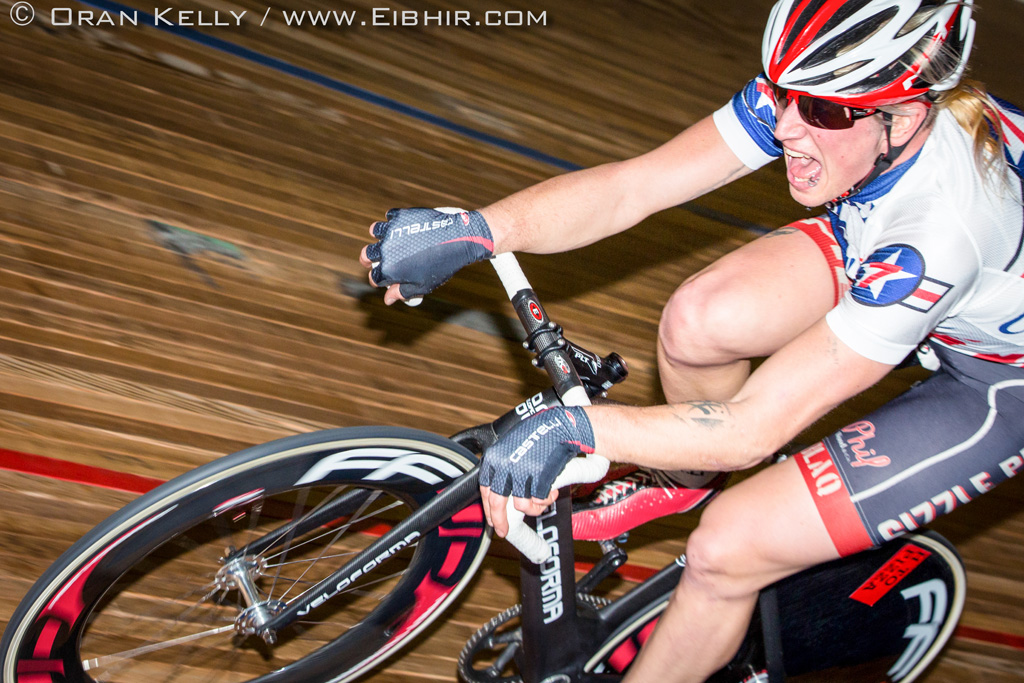 We would like to acknowledge and thank all of our sponsors: Vie 13 Kustom Apparel, Jukeboxprint.com, Livestock, Incase, Dam’s Ford, Musette Caffe, Dandy Horse Cycles, VeloFix, Jonathan Wood Design, Felt Bicycles, and Tinhorn Creek Vineyards. We would also like to thank Hosting BC, the Province of BC, ad ViaSport for their support of this event.

Oh wow. It’s the season of giving and the Burnaby Velodrome Club couldn’t help itself in providing all kinds of programming for our members …

On December 21st, at 645PM, the Burnaby Velodrome Club be hosting the Second Annual Krampus Christmas Challenge! The tradition was started when two of …

We are proud to announce that we will be hosting the BC Provincial Championships at the Burnaby Velodrome this year. Mark the date on …